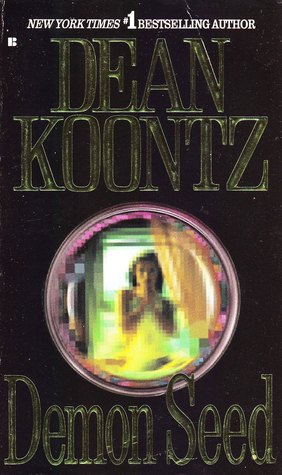 Susan Harris lived in self-imposed seclusion, in a mansion featuring numerous automated systems controlled by a state-of-the-art computer. Every comfort was provided, and in this often unsafe world of ours, her security was absolute.

But now her security system has been breached, her sanctuary from the outside world violated by an insidious artificial intelligence, which has taken control of her house.In the privacy of her own home, and against her will, Susan will experience an inconceivable act of terror. She will become the object of the ultimate computer’s consuming obsession: to learn everything there is to know about the flesh…

I had no idea what this book was about. I am not going to read the synopsis of his books before I pick them up. I think that is part of the fun with his books, you’ll never know what you are in store for.

Demon Seed was nothing that I expected at all. At first I thought it had to do with a woman being pregnant with the devil’s child. It isn’t but in a way it almost is. Susan is going through a divorce from her husband and has basically became a recluse because of the pain of the separation. She has her own personal demons that she is dealing with in her own way. Through a virtual therapy session that she has designed herself with dealing with the pain she endured as a child. One morning in her house she cant shake the feeling of being watched. She was. Not by any human though but an Artificial Intelligence entity that has corrupted her security system. It wants nothing more than to be free from its computer self and become human. He has also fallen in love with Susan and the only way he can seem to become flesh is to impregnate Susan and put his conscience into the baby.

This book had me on the edge of my seat and I rooted for Susan all the way through the book. Not only did she conquer her inner demons she is able to outsmart the A.I. and free herself.

I read this book in a total of 2 1/2 hours because it is such a fast read and I can not wait to read the next book on my list!!