Paperback, 1st, 232 pages
Published 2014 by Brock D. Publications
*I received this book for an honest review by the author*

It’s been two years since an epidemic ravaged the earth, leaving hordes of infected that still roamed the streets with an insatiable hunger for anything fresh and moving. Kaylee and what’s left of her friends and family fight for survival in the crumbling remains of their city. Hundreds of infected beat at their doors and walls, including Kaylee’s mother, who now haunts them with her presence on their old street. But when the group plans an escape north to an area free of the infected, the consequences of their devastating escape from the city will leave Kaylee forever changed. (Goodreads)

I have been a fan of zombies, I would say, my whole life. I remember watching Night of the Living Dead when I was around 5 or 6 and loved it. So as the years progressed so has my love. Of course I am a Walking Dead fanatic but what I love more than watching is reading stories about zombies. It is always more intense for me because I feel more wrapped up in the story. This book is no different.

Break Free The Night was a very unique take on the zombie apocalypse. Not because it was about a small group of survivors but how the zombies actually acted that got me hooked. I was surprised that they are active during the day but completely shut down during the night. They seem to be a mix of classic zombie and the infected from 28 Days Later to me. The older the infection the slower they are.

We are taken along 2 years after the initial outbreak to a small group of people that barricaded themselves in an old fire station. To me that is a very logical place to  hide out from the zombie horde, if you ask me. Kaylee is the main character and she is living there with her dad, younger sister, best friend Andrew, his dad and another woman named Anna. They try to live the best that they can but its when Kaylee is attacked by a man, she thought was a zombie, did everything change for her. This new man in her life shows her that the possibility of more survivors out in the world is not just a dream. Trying to convince her over protective father that they need to leave is a real challenge. Also Kaylee trying to decide what the best thing for her own life and heart is another challenge.

I liked everything about this book from setting to characters. It has action, teenage angst, very intense scenes, and some heartbreaking moments. If the zombie apocalypse actually happened I would want someone like Kaylee on my team! I can not wait to read the next two books to see what happens to this group of people! 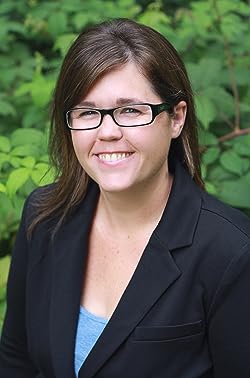 E. M. Fitch is an author who loves scary stories, chocolate, and tall trees. When not dreaming up new ways to torture characters, which she truly loves to do, she is usually wrestling her four children into order. Or, more realistically, trying to think up ways to tire them out so she can get an hour of peace at night. She lives in Connecticut, surrounded by chaos, which she manages (somewhat successfully) with her husband, Marc. (Amazon)