Born to serve the merciless Oracle, Clio wants nothing more than to break free. But when her entire family is murdered by Mannix, the king’s adviser, Clio inherits the Oracle’s power, a power she never wanted and doesn’t understand.

Hunted by Mannix, Clio is forced to flee her home in Sheehan and seek refuge in a foreign city where oracles are forbidden. If she’s found out, she will be sacrificed atop its great pyramid.

Clio has no choice but to win the trust of Riece, an enemy warrior. Despite the undeniable attraction between them, Clio knows that if he finds out who she really is, he won’t hesitate to execute her.

Clio tries to hide her budding powers, but the Visions she keeps having of Mannix and his barbarian army slaughtering her people torture her conscience. She alone has the strength and foresight to stop him, but only if she can embrace her destiny and sacrifice everything.

I contacted Emily Wibberley through Instagram and I just had to have a copy of this book. The cover is absolutely gorgeous and the tagline struck me.

“Knowing the future can save her city – but not her heart.”

I mean I had to find out what this was all about. So Emily was so sweet and sent me a copy of her first book. I am so grateful for it too.

This book is a whirlwind of action, mystery, and romance. There are a lot of things that I loved about this but I am not going to give you any spoilers.

Clio is our main character and she is 15 years old. She is next in line to become a Vessel for the Oracle, when she turns 16. Clio has seen what that means in her older sisters and she doesn’t want to become what they are. So she decides to run away. On that fateful night her family, but her sister Ali, is murdered by the King’s adviser and the Oracles powers get transferred to Clio. She learns that Ali was taken to the Emperor. So she sets out to save her sister.

Clio disguises herself as a slave so she can sneak into the city. She is imprisoned and meets Riece, the Commander of the Emperor’s army. There is a definite connection between them but she can’t tell him what she really is. They will execute her on the spot for being an Oracle. The slave girls that are taken to the pyramid are all to be sacrificed and Clio does her best to stop them.

She has to accept who she is and take her place in this world!

There are so many twists and turns in this book. At certain parts it did make me gasp and smile like a complete idiot. My cheeks were hurting so bad from smiling so big.

The character development in this book was great. I loved watching how Clio went from this scared little girl to a powerful woman. She is by far on my list of favorite heroines. Her relationship with Riece was heartwarming but also heartbreaking. Why Emily…..why?

In all seriousness, this book has taken me out of my little reading slump that I have been in. It was so refreshing and I loved every part of it. I can not wait to read the second book! 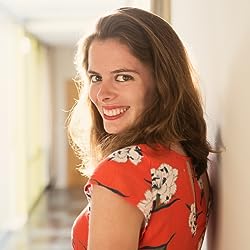 Emily Wibberley grew up in the South Bay where she spent her formative years battling zombies on her Xbox, watching Buffy the Vampire Slayer, and voraciously reading everything from The Hunger Games to Jane Austen, where her love for feisty young heroines was born.

When she isn’t reading the latest YA book, she enjoys watching kick-butt action movies with her two rescue German Shepherds, Hudson and Bishop, named after characters from James Cameron’s Aliens.