Zombie Attack! Rise of the Horde is the first book in Devan Sagliani’s zombie trilogy. I received the trilogy e-book style to read for review and let me tell you I was so excited to get them. I love post apocalyptic stories of all types but zombie plots are my favorite. I am myself writing a kind of zombie book. ( Chapters are posted on my blog….*wink wink*)

Mr. Sagliani’s zombie apocalypse takes place in California. We follow Xander, a 16 year old with martial arts training and is awesome with his katana,  and his friend Benji, a 12 year old comic book lover. Xander’s brother Moto left him at Vandenberg Airforce Base and promised to come back for him. While he is gone the zombies seem to be more organized and form hordes capable of taking down walls. They swarm the air base and the boys nearly escaped with their lives. They meet up with a young Celebrity named Felicity and she helps them along their way towards Port Hueneme to find Xander’s brother.

From that night on its a rollercoaster of fear, close calls, and survival. Xander and Benji come up against Neo-Nazis, cult activists, cannibals, outlaws, biker gangs. I felt so bad for the main characters, they never really got to much of a chance to take a deep breath before someone else is trying to kill them. I also loved all of the pop culture references!!! It kept me on the edge of my seat and I can not wait to start Book 2: Curse of the Living 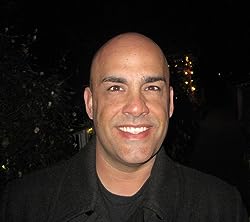 Devan Sagliani was born and raised in Southern California and graduated from UCLA. He is the author of the Zombie Attack series, The Rising Dead, A Thirst For Fire, and the Undead L.A. series. Devan also wrote the original screenplay for the movie HVZ: Humans Versus Zombies. He writes a bimonthly horror column for Escapist Magazine called Dark Dreams. In 2014 he cofounded the At Hell’s Gates horror anthology series with Shana Festa, which donates all proceeds to The Intrepid Fallen Heroes Fund to help wounded soldiers and their families.

Devan is an active member of the Horror Writer’s Association. His fiction has been nominated for the Pushcart Prize and the Million Writers Award. In 2012 his debut novel Zombie Attack! Rise of the Horde won Best Zombie/Horror E-book on Goodreads.

He currently lives in Venice Beach, California with his wife and dog.